It is not frequently that I hone in on a news story, but this one takes the cake for being outright propaganda and, as they say, fake news. The headline alone is bad enough:

“Released to Reoffend: News 11 investigates the sex offender next door”

Before I get into the problems with their headline and propaganda, let me talk a little bit about prevention and why focusing on prevention is badly needed. Here in Minnesota, according to the Minnesota Department of Corrections’ Mark Bliven, 93% of criminal sexual conduct (sexual assault) cases are perpetrated by people with no criminal record. A study on 21 years of arrest data in New York found that 95% of sex crimes were committed by people with no criminal record.

In other words, our best chance of stopping sexual crimes before they happen is by figuring out why those people commit sex crimes and intervene before that point. The problem is, that help is not readily available, and the stigma on the issue drives down reporting rates (people do not want their loved one to get into legal trouble, and 90% of child sexual abuse is perpetrated by someone the victim trusts and cares about). People cannot come forward for help if doing so means significant social backlash.

Back To The Fake News

There are just a few problems with this claim: Reoffense rates are nowhere near the 99% rate that Amberly’s Place – and KYMA – claimed they were. Not even for any crime (which is usually higher than for sexual offenses). In fact, the highest recidivism rates found in a comprehensive 2005 Arizona Department of Corrections report was 52.6% – and that figure was in reference to the number of people who went to prison for ANY reason and returned to custody for ANY reason. On the subject of sex offenders? 9.7% of all recidivism was a new sexual offense, with child molestation being the lowest at 4.6% (page 6).

Broadly, with a 9-year follow-up (most who reoffend do so within 3-5 years, not 9), the Bureau of Justice Statistics reported that reoffense rates for people who committed sexual crimes were lower, on average, than almost any other category, and the highest recidivism rate of any category in the report (released in May, 2019) was just under 90%… for property crimes.

In short, the 99% figure is a complete falsehood.

But that did not stop Jenny Day of KYMA from ignoring the multitudes of people who stopped by to comment on her propaganda piece: 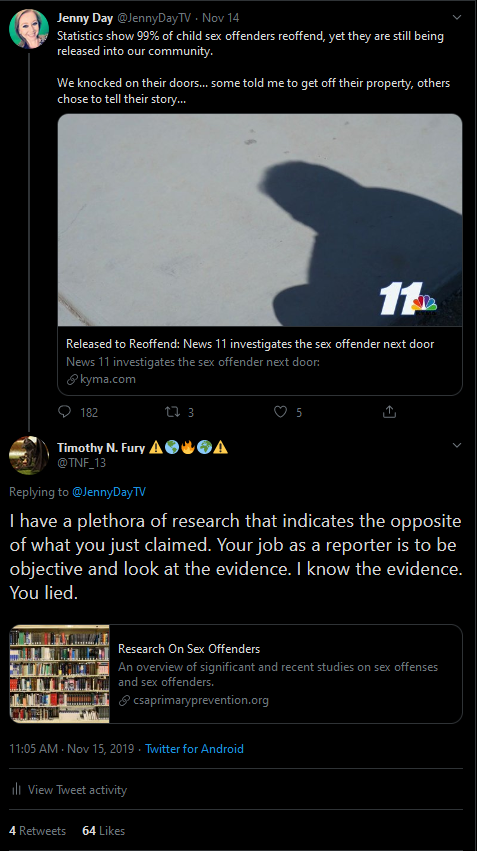 As of 11/19/2019, five days after their smear article, no response has come from Jenny’s bosses, from Amberly’s Place, or from Jenny herself to correct this blatant misinformation.

One must wonder why an organization that is committed to helping victim/survivors would spread information that flies directly in the face of policies that can help reduce sexual violence, or why a “news” organization would stick to blatantly false statistics.

What You Can Do To Help

The biggest thing you can do to help is know the facts, and correct people when you see them spreading falsehoods like this. “Actually, I read in the news that the only crime with a lower recidivism rate than sex offenses is murder, so I’m not sure that’s accurate, Bob.”

In this case, I would encourage you to contact KYMA (call them), sign this petition, or contact Amberly’s Place (again, call them). You can also submit a complaint to the FCC (see also here). Commenting on the original news story or on Jenny Day’s tweet would also be helpful.

Ernesto Romero, the news director at KYMA News 11 replied to my initial contact finally on the morning of November 21st. The start of the article now reads: 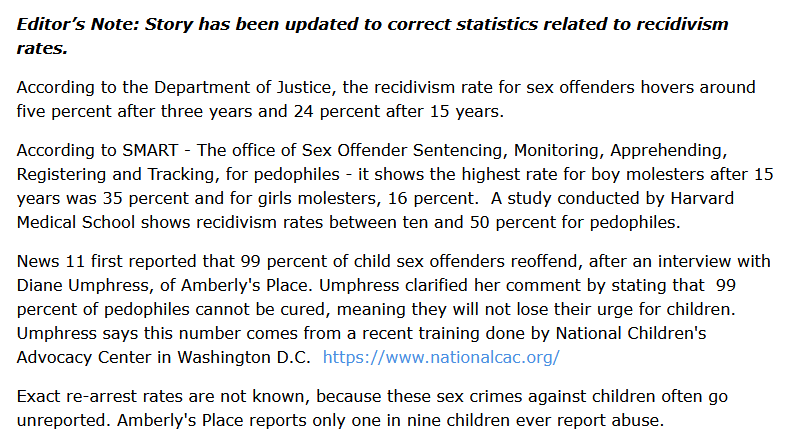 I replied to Mr. Romero as follows:

Citations for the information contained in the above information regarding the sexual attraction to children can be found on my website. I attached the full text of these articles in my reply.

While I understand that sexual violence is a nuanced issue for people, I also believe the news should do its due diligence in researching the topic to present an accurate picture, not a caricature.

Advocate for the Primary Prevention of Child Sexual Abuse View all posts by Timothy N. Fury